Sitting at Vitalia's red-and-white-chequered-cloth tables, watching myriad luxury yachts gently bobbing at anchor, you could be forgiven for thinking that you'd been transported to Naples for an evening of culinary delights... and that's just the impression the theatrically inclined restaurateurs Vitalia Zanda and Antonio Lo Conte hope to convey.

The couple first met when Antonio saw Vitalia performing on stage in her hometown near Naples. Instantly smitten, he asked mutual friends to introduce them and they hit it off, but sadly, fate had other plans and Antonio had to return to London where he was working at the time.

It wasn't until three years later, when he returned to Italy to start a theatre company, that they reconnected and had their first romantic date in Rome, where they bonded over their mutual love of theatre, food and music. The rest, as they say, is history.

"After three months I asked her to marry me, three months after that we got married, and now we are celebrating our ten-year anniversary," says Antonio.

Just a few years later they struck out for a new life in Australia and with Vitalia's extensive experience as a chef, they founded their own restaurant at Holloways Beach, just north of Cairns. After years building up a loyal customer base, they seized an opportunity to move to their present venue in the heart of The Pier waterfront dining precinct.

This new venue gave them an even bigger stage to shower their guests with traditional Italian hospitality and Vitalia's innovative take on Italian cuisine.

Vitalia, who studied cooking in Italy before building her career at various restaurants across the country and in London, says she enjoys experimenting in the kitchen and giving a new twist to some familiar, and not so familiar, Italian dishes.

Take for example her Fregola Sarda Vitalia's, which uses as its base a type of pasta originating in Sardinia that resembles couscous and is made with semolina flour. The nutty taste of the Fregola pasta combines delightfully with the clams, prawns and chilli, which are sautéed in Sardinian vermentino white wine then finished in cherry tomato sauce and dusted with saffron.

Another dish you won't see on a typical Italian menu in Australia is the Cavatelli Bianchi & Neri – black and white “little cave” pasta coloured with squid ink and topped with clams and reef fish sautéed in prosecco, Sardinian bottarga (cured mullet roe) and served on a bed of saffron Parmesan fondue with chilli-lemon zest.

“A lot of our signature dishes are my take on traditional dishes, my interpretations. They are not strictly traditional as my cuisine is always evolving,” says Vitalia.

This flair for the flamboyant extends to their hospitality and on special occasions, such as a birthday or anniversary, Vitalia will take a break from the kitchen to join Antonio in serenading their guests. With Antonio playing guitar and Vitalia accompanying on tambourine, the pair will sing duets of traditional songs from the famous Neapolitan repertoire.

“For us its very fun to play for the customers, we want to give the complete Italian experience, not just the food but with traditional songs,” says Antonio.

The vibrant, welcoming atmosphere at Vitalia's continues during their live music and tapas cocktail evenings every Sunday from 3 to 5pm.

Vitalia's award-winning Neapolitan-style gourmet pizzas are also a must-try and use San Marzano tomatoes, which have a stronger, sweeter and less acidic taste than Roma tomatoes.

“Naples-style pizza is softer, has a puffy edge and is cooked in a special oven with a higher temperature. It's cooked directly on the stone... that gives a big punch to the dough and a quick rise,” says Antonio.

You can also find their signature pizzas, along with a selection of other popular Neapolitan street foods at the duo's newest venture, Vitalia's Street Food, on Lake Street in the Cairns CBD. This takeaway-only dining concept was born from their nostalgic longing for the street food they grew up with.

The menu features delicious deep-fried snacks that provide a much-needed alternative to the late night kebab for revellers in Cairns' nightlife hotspot. The Calzone Fritto, deep-fried folded pizzas, are a beloved staple of Neapolitan street food and come stuffed with a selection of premium fillings that will tickle your tipsy taste buds after a night on the town. 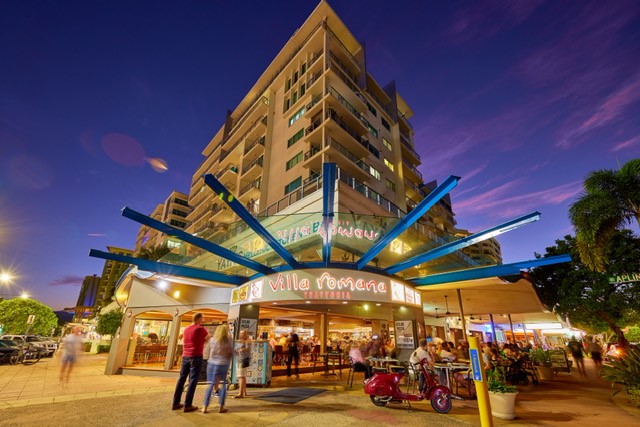 Where's the real beer up here!